TOMORROW'S GONNA BE A SHITSTORM! 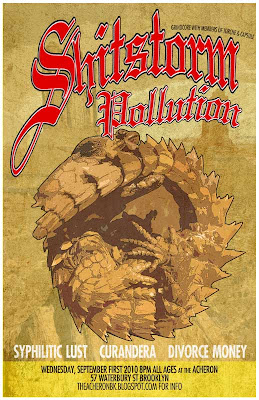 Posted by The Acheron at 9:15 AM No comments:

We're really stoked to announce a new Bi-monthly Comedy night at the Acheron: REBELS WITHOUT APPLAUSE. Hosted by Stephen Bianchi, this Tuesday night event brings New York and Brooklyn's best underground comics to our stage for FREE! Just come, hang out and laugh tonight the the amzing talents of Comedy Central Hot List's ANTHONY JESELNIK (video below from HBO's Down & Dirty), and Emmy nominated writer JEFFREY JOSEPH (the Tonight Show w/ Jay Leno). Come make this a success and we'll do this every other Tuesday, always for FREE.

Posted by The Acheron at 9:10 AM No comments:

For those of you that don't know, Khann play a sort of sludge/grind that's growing increasingly popular these days. There are various possible descriptions: Isis with more anger, Goatsblood with less negativity, Mastodon with less sucking, etc. Perhaps the best parallel would be with Sweden's Crowpath; there seems to be a lot of similarity to that group's 'Son Of Sulfur' release. However, Khann is pretty unique in their own right. Tempos frequently swing from blistering grindcore to ultra-slow sludge on a dime, and each performer seems to play their respective instruments and scream their individual lyrics in a particularly (well, not enthusiastic) insistent manner. Above and beyond this, there's a sense of melody that seems more developed than your average grindy sludgy corey whatever band that makes the music actually enjoyable to listen to on its own right, as opposed to through a lens of progressiveness. Khann seems to be at their best when they're venturing into post-hardcore or whatever you want to call it Isis-style territory. It's subtle, but most certainly there on songs like 'Black Water Permiates', 'Leeches', or, the best track on the demo, 'Squall'. If you can let yourself soak in this moments which seem to represent Pelican listening to too much Napalm Death, then you'll be faced with easily the best and most emotional (though I'm sure they'd hate that descriptor) parts of this release. Hell, I'd even describe those parts as sublime. The noisy parts are all well and good, but if you look at the songs as being structured in an almost post-rock way (with the noisy parts as the instrumental sections and the emotional parts as the climaxes), the overall feel of the music is greatly improved. Flaws? Well, it's pretty damned inconsistent, to be honest. I'd say the music jumps around a little too much, but of course this is simply a matter of taste more than any objective critique. It seems that certain songs on here are designed to fit some sort of perceived requirement for 'brutal' music; the gap between tracks like 'Squall' and the lesser ones like the title track is just too damned big to ignore. Luckily, the good parts are so damned good that you can easily ignore the less pleasant portions and just bask in the ones that work so flawlessly. I'd say that if Khann concentrated on tracks such as 'Squall' (which really seems to represent their personal style), they could be one of the premier bands in the... whatever, I'm not going to bother to find a genre, scene. So, 'Tofutopia' generally works out with more hits than misses, much to my pleasure. Check it out here and check them out live; I certainly will be. (Review from: grindingtheapparatus.net).

Khann - Tofutopia: http://miniurl.ws/?r=c7i (Thanx 2 Krustie!)
Read more: Doomed To Be Stoned In A Sludge Swamp: 9/23/07 - 9/30/07 http://sludgeswamp.blogspot.com/2007_09_23_archive.html#ixzz0xXR2BZrG
Your source for Sludge, Stoner, and Doom
Sharing the stage with Khann tonight are Ohio metal Warriors MOCKINGBIRD and BEFORE THE EYEWALL, as well as Local mosh maniacs DIVIDER! 8pm $8 ALL AGES The ultra-influential Philly hardcore / metal band (let's not use that other term) STARKWEATHER has emerged for the grave after nearly a decade of silence. With their new LP "The Sheltering Night" on Deathwish, the innovative technicians blaze through all notions of what hardcore is or could be. They pummel you from the stage Saturday, along with crushing HC/doom monsters RAW RADAR WAR, THE COMMUNION, and PANZERBASTARD for a show dedicated to and benefitting the family of terribly-missed NY promoter and musician Lee Altomare. 8pm ALL AGES.
Posted by The Acheron at 9:00 AM 1 comment:

Baltimore power violence grindblasters TRIAC have been out on the road the last two weeks with Brooklyn's own CURANDERA, pummeling the east coast. They finish the excursion off tonight at The Acheron along with Philly's BACKSLIDER. An all out assault that will be over in a flash, so get there early not to miss anything.  8pm just $6 ALL AGES

Tomorrow night (8/21) brings the stench-ridden hand of doom. OILTANKER from connecticut have two blistering EPs of metalcrust that rival the best around. They're touring with fellow yankees ATTENTAT, a punishing battery of kang beat. Richmond's WINDHAND delivers the serious heaviness, though. Best described as "Like knocking back a bottle of whiskey with Wino at a funeral", these southern folks share members with MIGHT COULD and FACE DOWN IN SHIT. please bring ear protection.  Also with DRAIZE and BLACK WING. 8pm $8 ALL AGES

Orlando's KHANN have an axe to grind with everything. These Floridian vegans throw you back and forth between Isis-esque titanism and Page99's furious spasms on their Metal Blade Debut, Tofutopia. They meet up here at the Acheron to join Ohio metal warriors MOCKINGBIRD and BEFORE THE EYEWALL, and New Jersey barbarians DIVIDER. Tuesday August 23rd 8pm ALL AGES. Presented by City Lights.
Posted by The Acheron at 1:39 PM No comments: 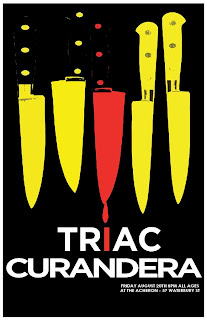 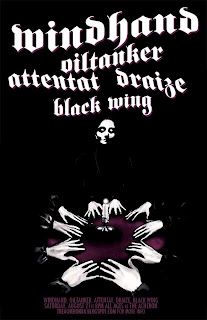 Then Saturday, get ready for the room-shaking heaviness that is WINDHAND. Hailing from Richmond, WINDHAND revels in classic doom riffs turned up to 11. This is serious stuff for fans of ST. VITUS, PENTAGRAM, and ACID KING. For this show, they're joined by Connecticut Crusties OILTANKER and ATTENTAT, Boston's DRAIZE, and New York Newcomers BLACK WING. $8 ALL AGES!!
Posted by The Acheron at 8:31 AM No comments:

KEN MODE, CASTAVET and EAST OF THE WALL tonight!! THE BODY return and MORE!!!

Canada's KEN MODE tore Union Pool a new asshole in May, and tonight they're bringing their fury to our stage. These hardcore meets AmRep pummellers are touring on the way up to record with Kurt Ballou of CONVERGE at his legendary GOD CITY studio. Be prepared for some maddening rage unleashed upon poor ol' Bushwick tonight. Cross - city blackened proggers CASTAVET and epic sonic barbarians EAST OF THE WALL prime you for this, so don't be late! 8pm ALL AGES!

and if that wasn't enough, our favorite wall-rattling bowel rupturing duo of doom THE BODY are coming back!! last time they literally broke the glass on our front windows with their rupturous low end assault. this time we've reinforced. Psych bros BAD DREAM and DEATHBEDS get to join in the melee for this one on SEPTEMBER 16th. see you there!

other newly announced shows we'll be writing up in the next couple days - TRIAC and CURANDERA this friday! WINDHAND (members of FACEDOWNINSHIT and MIGHTCOULD) this Saturday, WOLVSERPENT/ARCHON/BEZOAR in october, and KHANN/MOCKINGBIRD/BEFORE THE EYEWALL/DIVIDER next week! stay tuned.

This weekend we've got a 1000 Knives Double Header! Friday brings the brutal hardcore stylings of THE LOVE BELOW and JUDAS, both from California, as well as the almighty MEGASUS, featuring members of LIGHTNING BOLT. Not to be dismissed, our favorite Brooklyn noise punkers POLLUTION kick it off. This show is going to be a rager! 8pm $10 ALL AGES 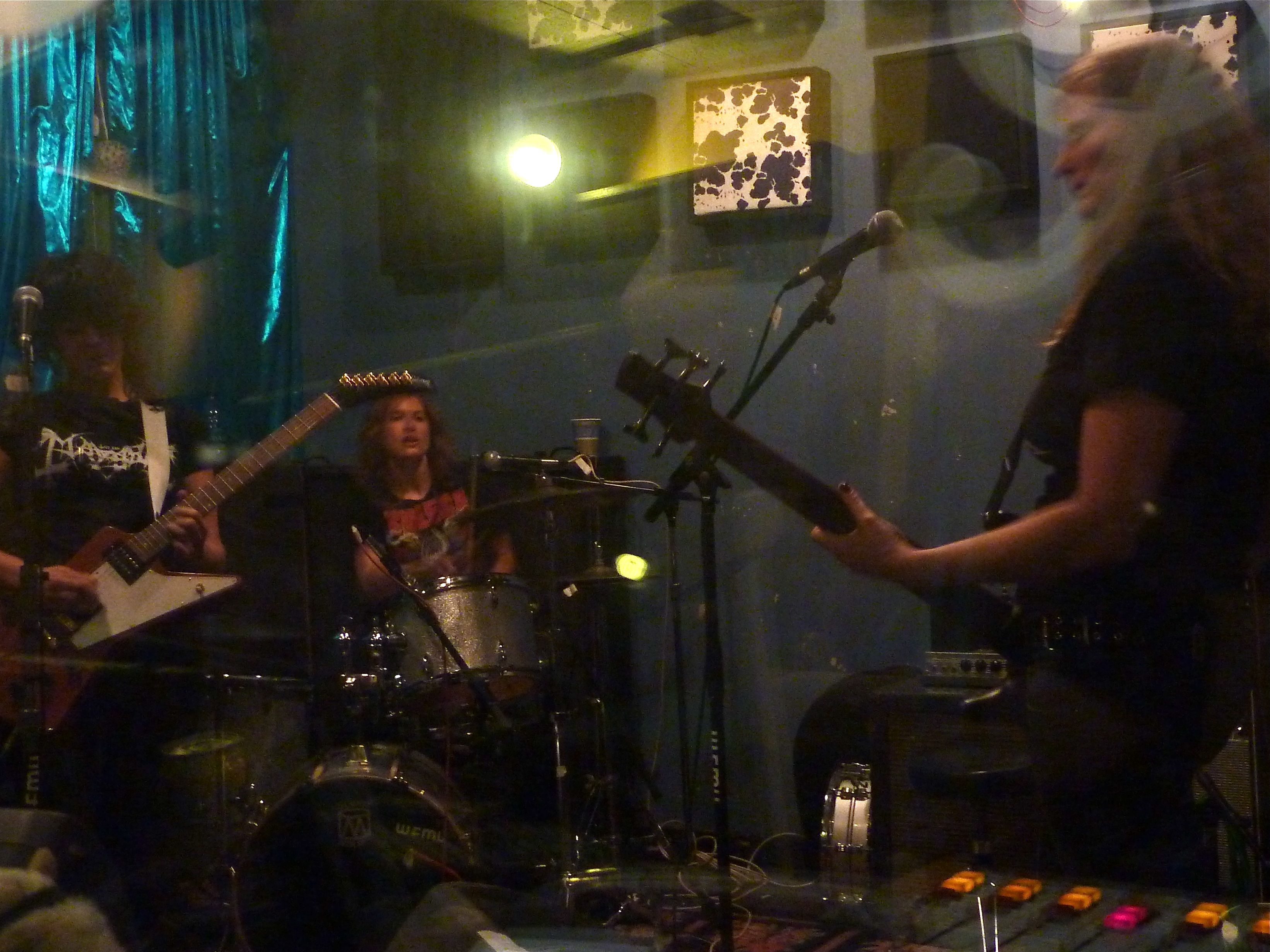 Alas, the terrible Texas twosome VASTE BURAI had to cancel their gig this Saturday with CONSTANTS and CITY OF SHIPS, but fear not! The wicked women of MORTALS have filled the void with their angular, post hardcore heaviness. a perfect fit for a killer show. Saturday 8pm $10 ALL AGES.

Keep checking back as next week we've got KEN MODE, TRIAC, and WINDHAND laying waste to bushwick. And some amazing surprises in store for you as well!
Posted by The Acheron at 11:27 AM No comments:

KEELHAUL and MY AMERICA played last week! check out these photos!

check out more photos and video at Brooklyn Vegan
Posted by The Acheron at 11:12 AM No comments:

Unable to get to last night's UNSANE gig in time, but not to be overlooked or wasted, Cleveland brutes KEELHAUL grace us with a night of killer jams. These guys have been doing the hard work of touring relentlessly (catch them on the road with UNSANE and TODAY IS THE DAY over the next month) for it seems like forever. This is one not to be missed. Openers MY AMERICA trod through the wastes of what was once hardcore but is now only suffering - the two of them alone.

get stoked!
Posted by The Acheron at 7:23 AM No comments:

And they're back. ACHERON favorite dudes THE BODY are coming back to rattle our bones and rumble our bowels on September 16th courtesy of 1000 Knives and Brooklyn Vegan. They'll be sharing the stage with BAD DREAM, THE STATS, and DEATHBEDS. As always, we're really stoked. Thursday, September 16th 8pm ALL AGES

Speaking of stoked, southern hardcore alumni THANK GOD, featuring members of in/humanity, guyana punch line, and antischism, will be showing up September 9th to pummel you with spastic mayhem, along with BEAUTY APES, DESCENDER (check out their recent write up in the NY Press), TROPHY WIFE, and local noise freaks CHILD ABUSE. what the hell that's a crazy night of mayhem! Thursday, September 9th 8pm ALL AGES

but first, on Saturday, September 4th, post-hardcore experts of the epic QUESTIONER will blow you away. the rest of the lineup has yet to be announced, but rest assured it will be one heavy night of metal.
Posted by The Acheron at 7:13 AM No comments:

as usual, thanks to Brooklyn Vegan for the kill photos and enthusiastic writeup.

Posted by The Acheron at 9:40 AM No comments: Brooklyn Noise/dance/weirdos UNSTOPPABLE DEATH MACHINES will be pummelling your eardrums this Saturday night at an eclectic show that ranges from pop songsters NT to UDS friends and drum addicts BONE TOKEN. come down and party!

Next week brings us a quartet of ragers - Virginia shredders EARTHLING bring their steel styles to our stage Monday the 9th along with Brooklyn death/moshers DEATH IMMORTAL, blackened punks WULFKRIEG, and death metallers DEATH SICK. Wednesday is a day of bestial screams and monstrous brutality, and Montreal crustlords BONEBLACK descend from the north to play with old school DM technicians MUTANT SUPREMACY, and brooklyn blackened raw infidels SYPHILITIC LUST.

and we're just getting started! two consecutive nights put on by the one and only 1000 knives start with hardcore juggernaut THE LOVE BELOW, Providence metal shredders MEGASUS, featuring members of LIGHTNING BOLT(!), Cali Power Violence JUDAS, and our favorite brooklyn noise punks POLLUTION. Friday, August 13th. 7pm $10 all ages.

and finally, in an epic night of huge sounds and slow, battering riffs, 1000 Knives and League of Scientists treat us to CITY OF SHIPS, on tour with CONSTANTS, whose new album is produced by none other than Justin Broadrick (GODFLESH, JESU). Texas Sludgsters VASTE BURAI and beer swilling bong rippers WIZARDRY kick it off. Saturday, August 14th 8pm $10 all ages.
Posted by The Acheron at 8:20 AM No comments:

The Acheron
Brooklyn, NY, United States
I don't like the artsy fartsy stuff. I like the real stuff.