We've got a hell of a weekend lined up for you. without further ado, here it is: 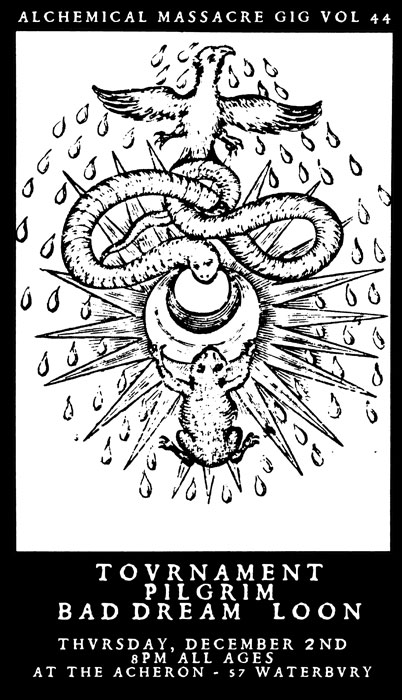 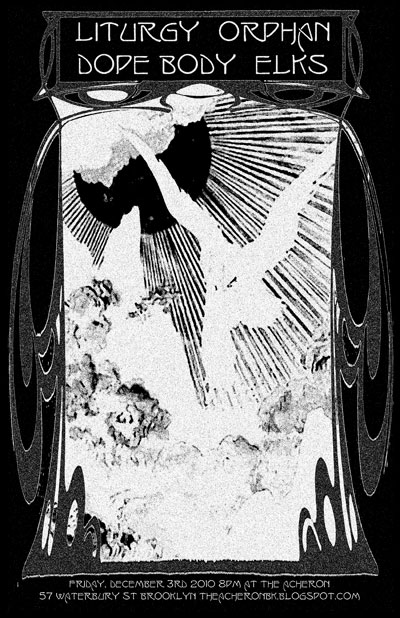 plenty more surpises coming up in the next few weeks as well!
Posted by The Acheron at 12:46 PM No comments: 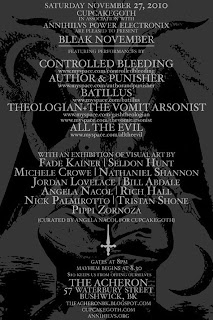 We're very pleased to announce that the CupcakeGoth / Annihilus "BLEAK NOVEMBER" Event is now happening at the Acheron, and it's Happening tonight! This festival of evil will showcase artwork from Fade Kainer, Seldon Hunt, our buddy Rich Hall, and many more, as well as sets of industrial, mtal and harsh noise from CONTROLLED BLEEDING, BATILLUS, AUTHOR & PUNISHER, and others. A great night of doom and gloom! and art!
Posted by The Acheron at 6:43 AM No comments:

A great week ahead of us here at the Acheron! Tonight we're excited to announce that Detroit rock n' roll juggernaut EASY ACTION grace our stage. Their brand of dirty, angry, sleaze-rock stands on its own, but it sure doesn't hurt that the inimitable John Brannan of NEGATIVE APPROACH does his duty as frontman. The killer lineup includes Brooklyn fuzz punkers THE MEN and the hard working PREGNANT. This should be a full night so get there early!

And tomorrow REBELS WITHOUT APPLAUSE triumphantly returns with Last Comic Standing Top Five finalist MYQ KAPLAN. His amazingly quick wit and wordsmithery will leave your head spinning... or maybe that'll be the beer. Anyways, Check out his recent set on Craig Ferguson:

But wait! there's more reason to come than just Mr. Myq, we've also got the hilarious Jena Friedman, who's appeared at the Glasgow International Comedy Festival as well as the Laughing Skull festival in Atlanta. Of course we're also proud to present our favorite local comics Max May, Dylan Love, and Jordan Hubert.  Make sure to get out to this one for Sure!

REBELS WITHOUT APPLAUSE FREE STAND UP COMEDY NIGHT - tomorrow, 11/16 9pm FREE!!
Posted by The Acheron at 11:05 AM No comments:

...since I've had a chance to update the blog, so let's get back down to business! Due to some unfortunate circumstances, This Saturday's double header is cancelled. But fear not! We've got a hell of a lineup this week starting with Sunday.

Listen Listen from Houston play haunting, lonely, memorial hymns baked by the Texas sun and aged by the dust of the plains. Their last LP, "Hymns from Rhodesia" made the top lists of 2009 by everyone from bloggers to Rolling Stone. Their new album, "The Dog" delivers more acheful country / folk tinged with gospel and even some experimentation into more modern sounds. Joining them this Sunday are Chicago's Conductive Alliance, who's recent EP "Water Glyphs" has received critical acclaim over the last year; and Brooklyn indie faves Bad Credit No Credit and Binary Marketing Show. 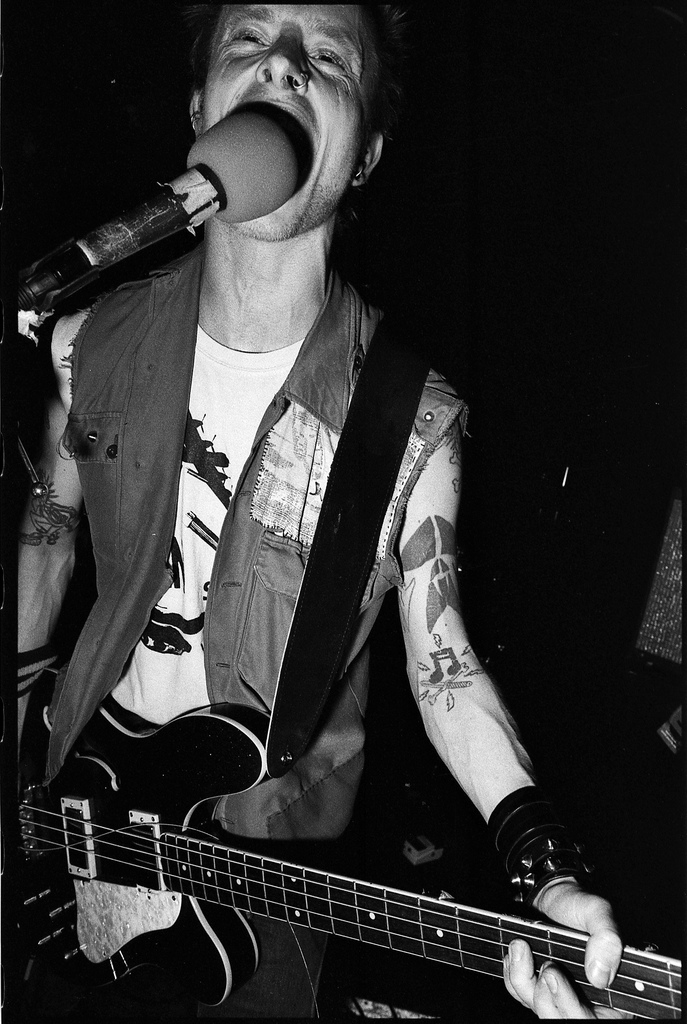 Copenhagen's HJERTESTOP were here a couple years ago, and tore the charleston apart. This year we're lucky enough to have them at the Acheron, sharing the stage with Brooklyn rippers NIGHT BIRDS and CERVIX, who just opened for AGE and HELLSHOCK at the Knitting Factory Saturday night. This one should really not be missed!
Posted by The Acheron at 11:10 AM No comments:

The Acheron
Brooklyn, NY, United States
I don't like the artsy fartsy stuff. I like the real stuff.